Starting a new habit is a lot like riding an elephant.

Have you ever felt like you were trying to force an elephant to move as you’ve started new habits? I have. And there is a reason for that.

Your brain has two, independently functioning systems that are responsible for your ability to get stuff done: the rational side and the emotional side.

The Rational Rider and the Emotional Elephant

In the book, Switch: How to Change Things When Change is Hard, by Dan and Chip Heath, the Heath brothers cite this same analogy, created by University of Virginia’s psychologist Johnathan Haidt, and illustrate the duality really well:

“…in his wonderful book The Happiness Hypothesis[,] Haidt says that our emotional side is an Elephant and our rational side is its Rider. Perched atop the Elephant, the Rider holds the reins and seems to be the leader. But the Rider’s control is precarious because the Rider is so small relative to the Elephant. Anytime the six-ton Elephant and the Rider disagree about which direction to go, the Rider is going to lose. He’s completely overmatched” (Heath and Heath 7).

In other words, when you are trying to build a habit to say, write every day, or go to the gym three times a week, or eat less sugar, and you fail, it is generally your Elephant’s fault. You and your Rider can make as many plans and rational arguments as you want about the glories of eventual publication, the benefits of regular exercise, and the hot bod you’ll have if you can just lay off the doughnuts. But you’re not going to get anywhere unless your Elephant is emotionally invested. The resulting graveyard of broken dreams and habits is all thanks to an uninterested Elephant. 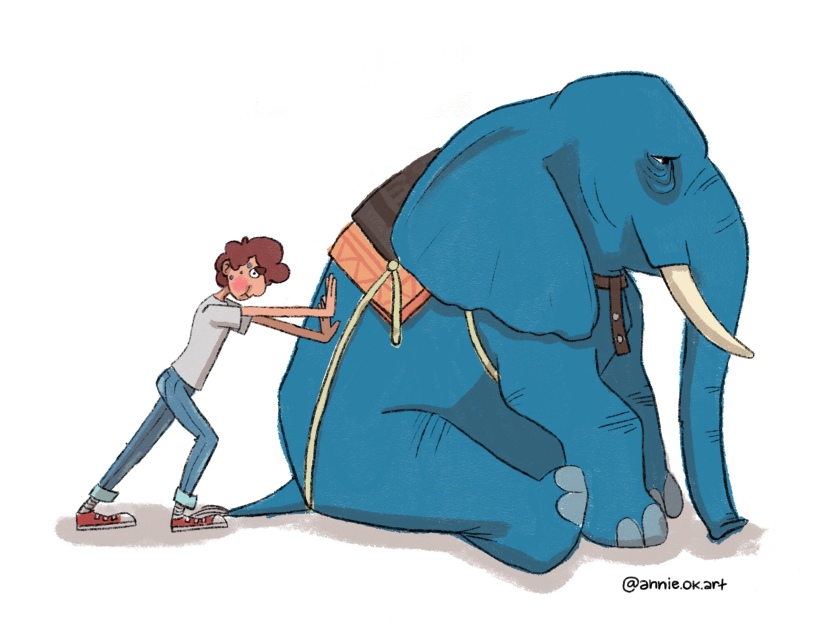 Now, I could do a whole different post about how to get your Elephant on board with your goals and plans. But for this post, I’m going to focus on exhausting the Rider.

Think back to the analogy at the beginning. How did the process of getting the Elephant to move sound?

To me? Miserable. Draining. Fruitless. Hopeless. The exact same words I would use to describe how I feel when I fail multiple times at establishing a new habit or reaching a goal.

Let’s say you have the goal to go to the gym three times a week. Emotionally, you start out involved (I’m tired of feeling fat and lazy. Let’s do this!) and you make a plan to go to the gym after work on Mondays, Wednesdays, and Fridays. The first few times you go to the gym, you’re probably motivated, but after your Elephant doesn’t see quick and easy results, it starts to lose motivation and it becomes harder and harder to use willpower to force yourself (and your Elephant) to just go.

What I’m learning more and more as I experience situations similar to this is that self-control and willpower are limited, exhaustible resources. It takes no self-control or willpower to complete tasks or habits that have become automatic. But the moment you try to break that automatic task or habit for something else, for example, exchanging an after work Kit Kat for gym clothes and a jog, you need to use a measure of willpower or self-control to get it done, because the Elephant wants that Kit Kat.

You have the ability to tug your Elephant around to get it to do what you want, but if you want a new habit to become automatic, you need to 1) work for it and 2) choose where your energy is going to go, because there are no free rides.

I experienced this phenomenon myself a few months ago. I was working on multiple goals at once: curb purposeless social media scrolling, eat better, run after work, and write every morning before work.

As I started implementing these four goals all at once, I found myself stuck in a pattern of failure. I would get up in the morning to write, no problem. Then I would go about my day, resisting the magnetic pull of social media morning until lunch, when I would force myself into eating a salad, even though all I wanted was chicken fingers. After that, I was back to resisting social media until by the end of the day, and when it came to running after work, all I wanted to do was sit on the bed, cry, and then eat a pizza and Cadbury Mini Eggs while watching Spongebob.

I can’t count how many times I caved.

I beat myself up for this over and over again because I felt like I should be able to successfully curb negative eating habits and get back into running. But it wasn’t until I was reading Switch that I realized what was happening.

I wasn’t lazy. I certainly wasn’t undisciplined because I was succeeding at two and a half of my four goals. The problem was I was working on too many habits at once and I was exhausted.

Suddenly, I found I could be much more forgiving of myself. I realized that I needed to cut down on what I was working on until some of the other habits were automatic and no longer took willpower for me to complete.

It was like a waterfall after that. It became second nature to write first thing in the morning, and suddenly it was easier to stay off social media, and after that, I could make better food choices, and so on and so on.

To bring this back around to the Elephant analogy, here is my challenge to you. While you are up there, perched on your Elephant, reins in your hands, plans in your head, take a moment and evaluate what direction you are going to work on moving your Elephant first. What goals are the most important to you? What habits are going to create the greatest impact on your life? After that, do your best to get your Elephant emotionally involved and don’t beat yourself up if the Elephant takes over and you fail. Be patient for the moment when the action becomes automatic and you’ll find yourself able to accomplish a little bit more.

What experiences have you had where your Rider has been exhausted from tugging around your Elephant? What techniques have you used to keep yourself going? Let me know in the comments below!

Courtney Larkin is a freelance editor and self-proclaimed Harry Potter expert.  When she’s not editing, she can be found binge-watching The Office, doing home renovation projects, or eating entire buckets of popcorn. Courtney lives with her husband, Zach, and cat, Winnie, in American Fork, Utah. See more from Courtney at https://larkinediting.com/.

Salt Lake City based artist, Annabelle Ok, has been hard at work refining her digital drawing skills since 2014. She grew up watching Saturday morning cartoons and turning to visual art as her form of self-expression. These influences later developed into a passion for all forms of artistic storytelling. Having her dream career inside the entertainment industry, she challenges herself to capture and communicate stories through her illustrations. See more from Annabelle at https://www.instagram.com/annie.ok.art/.

3 thoughts on “The Writer vs The Elephant”

What do you think? Cancel reply